Today was our last banding day at Niagara boat launch. We were in our own misty world, completely encased in a dense, chill fog for most of the morning. Occasionally at the nets we would hear disembodied voices, muffled shouts and mumbles coming from the fog. The voices always came from the same direction, from out on the bay... eventually we put two and two together and remembered that, as we are at a boat launch, there are lots of fishermen putting in at Niagara, which means lots of fishermen out on the water, just offshore of where we have our nets set up. Not nearly as glamorous as having a haunted banding site, but drama-free banding is the best kind. The birds give us enough fuss as is, we don't need any ghosts hanging about causing problems.
Along with the voices, the Niagara mists were also full of blackpoll warblers. While we didn't actually catch 1,000 of them, it sure felt like it. Probably half of the birds we caught today were blackpolls. As an added bit of spice, we did catch a bay-breasted warbler female in the mix. She was rather nondescript and was faintly confused with a blackpoll female, but after minor deliberation we figured her out.

We were also excited about a recaptured white-breasted nuthatch, our second of the season. Quite cute birds, with their little upturned bills and gray hats. Amy was particularly charmed, and took some lovely pictures (below). 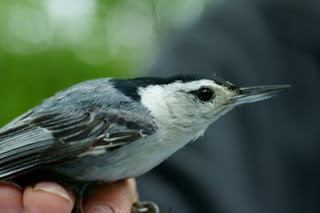 Red-eyed vireos were our second most common bird of the day. They are feisty little ones, clacking and snapping any fingers that get close. They are not afraid to let you know that they have bills and know how to use them. Luckily they're not big enough to actually hurt when they bite you. Their beady red eyes, fixed on you in a death stare, are for some reason reminiscent of dinosaurs. If looks could kill, we banders would have been incinerated long, long ago. One gets a feeling that these birds, if given the chance and inclination, would gladly peck us to pieces with their tiny insect-eating bills. Birds with blood-red eyes, coming out of the mists to attack people... I think we've got the makings of a good horror movie here :)


In other bird news:
Yesterday Lauren went to assist with the rescue of a young red-tailed hawk. The nest it shared with a sibling had fallen down, presumably in one of the recent storms, so Tamarak Wildlife Rehab came to the rescue. The other youngster didn't make it, but both parents were still around, caring for their remaining youngster. There were at least 5 headless squirrels laying around the yard, temping morsels for the baby hawk. The rescue team climbed a nearby tree and lashed a wicker basket filled with straw up for a new nest.

Unfortunately, the baby had a wound on one wing, and had to be taken in to the rehab center to be cleaned up. Tomorrow it will be put into its new nest, and Amy and Lauren will be along to assist. Amy plans to bring her camera, so hopefully we will have cute baby hawk pictures to share! We'll keep you updated.


Only two more banding days left, Monday at Erie Bluffs State Park and Tuesday at Fry's Landing. If you've yet to come out and visit, now's the time! Otherwise, you'll have to wait until August when we begin fall banding. So please come out and visit, we welcome all visitors and volunteers!